Water as a source of energy

Water is the source of all life. Without water there would be no living being on our planet. How important water is for us humans can be seen from the fact that we can only survive a few days without water, but weeks without food. As embryos, we grew up in alkaline amniotic fluid. This point alone shows how important water must be for us humans. Water is the basis of our life and cannot be replaced by any other substance.

Before we go deeper into the subject of “water”, I’dlike to explain why water is so important to us: Energy wants to flow in every single cell – just like electricity in a pipe. The energy in our body would like to flow as well – e.g. to enable digestion or thinking, to allow impulses to flow between the nerves. And for this energy to work at its optimum level, it  needs, among other things, water. Having said that, not all water is equally good for this flow of energy.

But what is water in itself? Let’s address this first. We will look at the basic chemistry, followed by  the more subtle perspective. Afterwards, we will explain the floating water bridge and how it might revolutionize our future.

Like everything on earth, water consists of atoms – two hydrogen atoms (H) and one oxygen atom (O), resulting in the chemical formula H2O.

We mostly know water as a transparent, odorless liquid that turns into steam at 100 degrees Celsius and into ice at zero degrees Celsius, which we can also see on the surface of the lake or snowflakes. Accordingly, water has three physical states: solid as ice, liquid as water and gaseous as steam. A fourth state of matter is discussed here..

Water can dissolve and transport substances. You know this from sea water, which looks exactly like sea or tap water, but has salt dissolved in it. The fact that the substances in water are not visible makes it difficult for us to distinguish between different waters.

The conductance and the pH value

The measurement of the conductance indicates whether water conducts electricity or not. If it doesn’t conduct electricity, it doesn’t contain any minerals – or pollutants. We find this in distilled, osmotic and cloud water. The water is empty and as a result it has an acidic pH. The pH value can  therefore be an indicator for differentiating between different waters (and basically liquids).

The individual water molecules constantly change their neighbors, forming new chains, or clusters several times per  second via so-called hydrogen bridges. The smaller these clusters are, the more movement takes place within the neighboring exchange, the “better” (ergo more energetic) this water is. Because in this short-lived exchange, the molecules not only follow a movement (= animation), but they also exchange information. This is similar to a conversation in which we pass on our sensitivities to other people.

However, why water behaves the way it does has not yet been clarified: the freezing and boiling points of water, the density and the surface tension do not correspond to the mathematically calculated values ​​that water should have. The so-called EZ water provides some information on this.

Water is not only able – but has a real urge – to absorb information from the environment and thus to be different from other water; similar to your experience. People might be very different from you because of different experiences, environment, upbringing…. and so is the water. This becomes visible in pictures of the crystalline structure of water. Here you can see water structure recordings before and after various events: https://www.masaru-emoto.net/en/crystal-3 and https://www.weltimtropfen.de/pdf/vortrag_071107.pdf

The crystalline structure of water

The Japanese water researcher Dr. Masaru Emoto made the crystalline structure of water visible through photographs and found that pure spring water has a structure similar to a snowflake – clear, almost luminous structure, unique and regular. Tap water, on the other hand, which is pressed through pipes and sieves with pressure, has little or no structure anymore and looks dull. However, through positive thinking, actions and external influences or even levitation (animation, turbulence), water can take on a crystalline structure again. Dr. Emoto has shown through experiments that music or positive thoughts, i.e. vibrations, change the structure (the above-mentioned clusters) of the water. With luminous, orderly structures, the water is lively, as the clusters reassemble quickly. It is high in energy, and the minerals it contains can be easily metabolized by our bodies, which I believe should be of interest in the medical or health sector.

Water receives natural energization through water vortices, also called levitation. Victor Schauberger noted this at the time of the Second World War. This energization – also called high structuring through the formation of clusters – is lost through external influences in the form of bad thoughts, electrosmog, but also through pressure (e.g. when filling or in the pipe) and heating such as boiling in the kettle. However, water is willing to keep its energization high – and absorbs information from the environment in a highly structured manner. Why this is the case remains unclear – but can be possibly explained using the EZ water.

An experiment by Dr. Noemi Kempe: The carcinogenic nitrate, which we also find in tap and bottled water (check the test report of your waterworks, for instance), is immediately rinsed out with energized water (can be detected in the urine). (See https://st-leonhards-quellen.de/transport-und-reinigung).

Other terms for energizing are: inform, charge, invigorate or structure on a subtle level. On a chemical level this is not (yet) detectable – but optically we can find examples of the crystalline structures in Emoto’s work (see also www.lebendiges-trinkwasser.de/wasser-energetisiert-beleben).

Here is an idea of how you can energize water and food:enrich it with subtle energy.  Draw a horizontal eight (the infinity symbol)  on your glass coaster. Energized cards, which are available from various manufacturers and which you put under your glass or plate, are even more effective.

Please note that energizing can only be limited in time. It is minimized at any time by electrosmog (your smartphone, for example), a lack of natural light or bad thoughts, no matter how good the energization was beforehand! You have to repeat the energizing regularly.

According to this, water is not only “good” because of minerals, but also because of its structure / energization, which forms naturally when light, water and water-attracting materials come together. At some point in the future, we will also show you how important light is for the human body alongside water.

As seen above, iit becomes clear that water can energetically differ from one another and can therefore also supply us with different amounts of energy. The following floating water bridge even shows that water can be used as a battery as it generates charged water and stores energy. We already learned at school that water stores energy in the form of heat, for example. But there are other ways.

Experiments under Dr. Elmar Fuchs and Jakob Woisetschläger at TU Graz with the support of the Dutch water technology center Wetsus show that water can be used as a chemical reactor through the floating water bridge. They were particularly interested in studying the interactions of water with electrical and electromagnetic fields.

Two glass containers are filled with ultrapure, distilled and thus deionized water up to 3 millimeters below the rim. An electrode with a high voltage between 15 and 25 kilovolts is immersed in each cup. One container receives the electrode with a positive electronic high voltage and the other container receives the negative voltage accordingly. When the voltage is applied, a spark is generated. Then the water rises on its own on the inner walls of both vessels and forms a bridge at the top, i.e. a stream of water over both vessel walls. If the two vessels are now pulled apart, the water bridge can reach a length of 2.5 centimeters, which will last longer. The minerals in water  increase the conductivity of the water (see conductivity value above), the water also heats up and the bridge collapses as a result.

Interestingly, the bridge does not hang down as we would know it from a string, but rather shows a kind of “stiffness”. This phenomenon was described as early as 1893. And while this phenomenon is well known, there is no accepted theory about it. The clues might be  Density and structure. Fuchs describes this state of affairs as “no man’s land between ice and water”.

The experiment was filmed and shows that the water is not liquid, but also not solid. Rather gel-like or stiff. 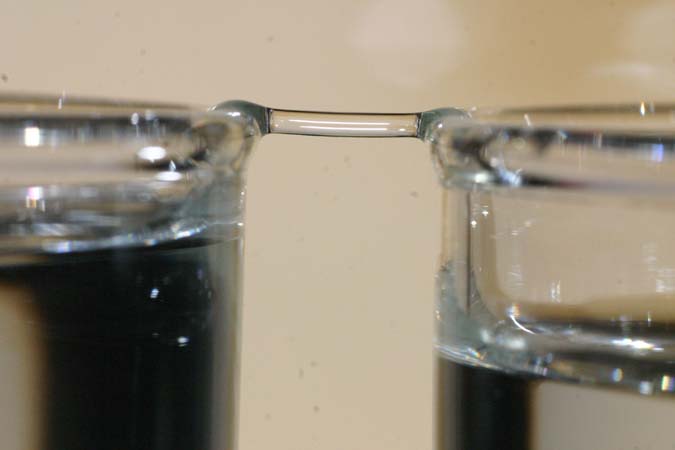 The experiments have shown that it is not a volume structure effect, but rather a surface effect. “The high density of electrical field lines apparently holds the bridge together,” says Fuchs. The structure of the water is so stiff that the water bridge can form and hold over a longer period of time. The reason is the excess charge of the water, which is created by the exchange of water on both sides within the water bridge: The charge is not electronic, but protonic due to the electrolysis that takes place. – Protons are formed in the positively charged container, which migrate into the negatively charged cup, where they are neutralized and reduced to hydrogen. Depending on the ratio of the protons, the water is charged positively or negatively.

The bridge also has a higher local temperature, which is due to the exchange of elements between the containers on both sides. The light is also refracted unexpectedly, which could indicate an internal structure of liquid water.

When the high voltage is switched off, the protonic charge is retained for up to a week before it – as already mentioned – collapses. This is why Fuchs speaks of a charge storage device, since the charge / energy is retained here (for the time being). This can be called a water battery.

Prospects for our everyday life

In his experiment, Fuchs showed that the hydrogen bridge creates a kind of water battery and as such can  serve as a storage medium for electrical charge. It’s a place where energy generation takes place.

This knowledge can also be of interest for medical applications and environmentally friendly cleaning agents as well as low-waste chemical processes. Let’s hope for further research in this area!

The hydrogen bridge might be also important for Waveguard, as it forms exactly the state that Waveguard products need for their energy transfer and as protection against electrosmog: Waveguard calls this liquid Qi-Liquid.

Take your EMF protection into your own hands.  We develop exclusive products for you both for on the go and for at home or in the office. Our Qi technology is integrated in all Qi devices.

Christine Pauligk is an author, healing consultant and energy coach. She supports women to develop a deep inner awareness of mind, body and soul in order to live their lives freely and healthily as well as trustfully and intuitively. She lives in the Munich area and loves the mountains. More information at: https://lebensweite.de